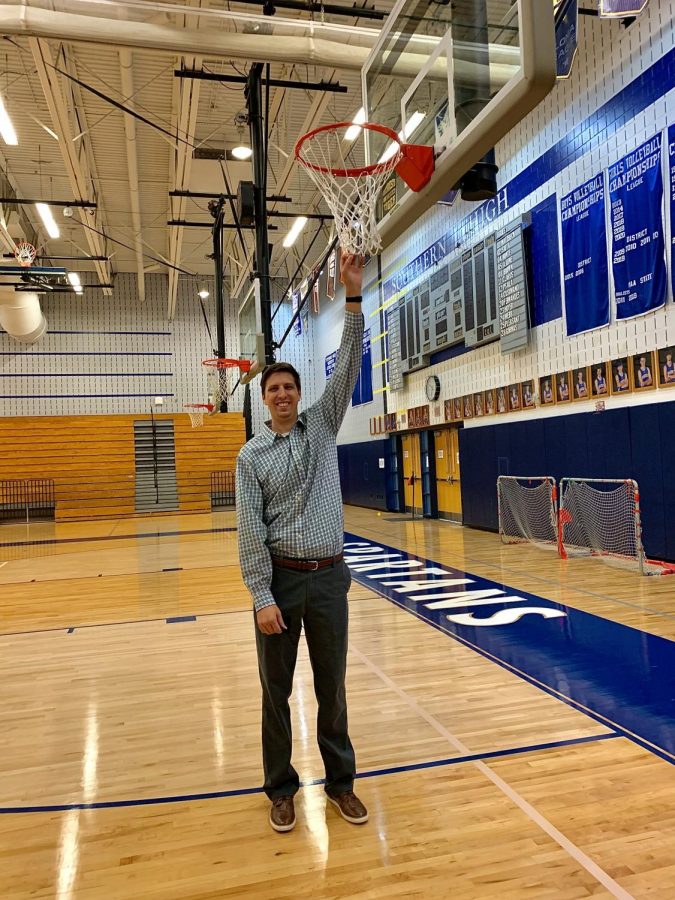 Stenroos showing off his "party trick"

After regularly substituting in the district for quite some time, social studies teacher Mr. Jordan Stenroos can finally call Southern Lehigh High School his home.

Mr. Stenroos is a newly appointed ninth grade Civics and Government teacher who covers all levels including Applied, College Prep, and Honors. He attended West Chester University, where he studied history and secondary education. Becoming a teacher has been his goal ever since he was a young student himself.

“I had really wonderful teachers in my high school in Emmaus,” he said, “and from that point on I realized that this was something that I could see myself doing.”

From his first time student teaching at Chichester High School, he immediately fell in love with the profession.

Mr. Stenroos spent ten summers working for the Emmaus Borough Public Works Department where he did everything from landscaping to painting. He began this job in high school, and continued to work there through college. He began substitute teaching in 2017 and continued working in this role right up until he joined the faculty at SLHS.

While Mr. Stenroos has a clear passion for teaching, what stands out the most is his devotion to his students, whom he describes as his “biggest inspiration.”

“As a teacher, your job first and foremost is to make sure your students are successful and to give them every opportunity to be successful,” he said. “Seeing that inspires me to work harder.”

Developing relationships with the students is one of the best parts about teaching for Mr. Stenroos, who would also consider running clubs or activities.

“I think Model UN is something that could be interesting, or really anything along the lines of current events or history,” he said. “I’m going to try and get involved wherever I can.”

Every morning Mr. Stenroos looks forward to greeting people in the hallways before the start of class. He especially enjoys seeing all the students he taught in past years while working as a substitute.

One feature that many students know about this social studies teacher is his impressive height. Mr. Stenroos confirmed he is 6 feet and 9 inches tall. It never bothers him when students bring up the topic; in fact, it’s rather the opposite. He enjoys the attention his height brings if it means he can connect with others.

Mr. Stenroos is excited for his journey at SLHS and hopes to bring a positive attitude, a warm welcome, and a helping hand to students in his classroom, where he tries to create “student-centered” experiences, and encourages them to try their hardest.

“Nobody’s perfect at anything, so it’s important to always give it your best shot even if you fail the first time,” he said. “Always try again, and make those second chances count.”

As a kid, Mr. Stenroos played intermural baseball and basketball. He still enjoys staying active by going on runs several times a week. In addition, Stenroos can be found watching football each Sunday with family and friends.