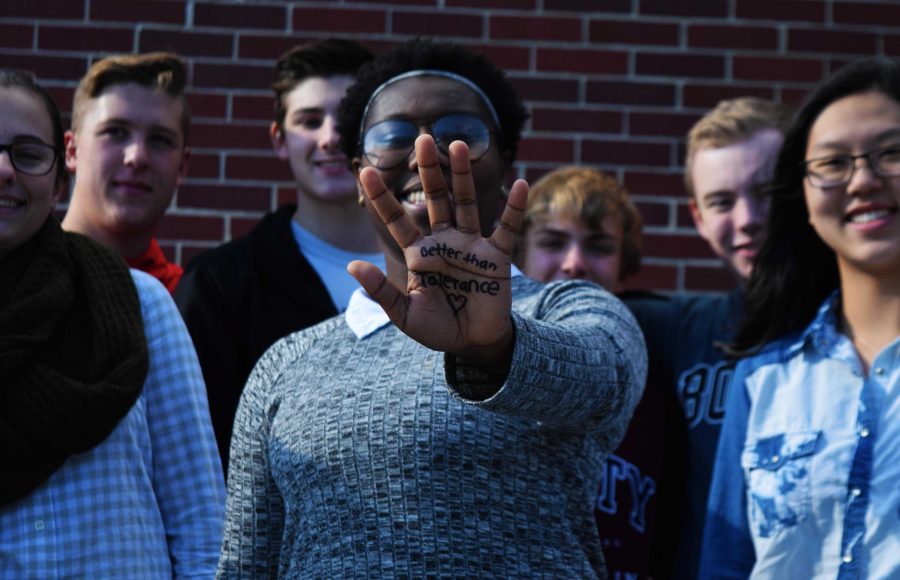 We want more than tolerance. We want acceptance.

High school is all about acceptance, and Southern Lehigh is no exception. All teenagers are familiar to the trials of fitting in, and for students who are part of minorities and marginalized groups, it can be a greater challenge, especially in an environment with limited diversity. Recently, our high school administration has taken steps to ensure that the school is a safe and welcoming environment for all students, beginning with an assembly for the student body and an email sent home to parents.

This email resulted in local news coverage by the Morning Call and Lehighvalleylive.com in the days leading up to the presidential election, and thanks to post-election social media, the story has gone viral, gaining Southern Lehigh the kind of national attention we never expected.

While the Spotlight recognizes that the issues of diversity, tolerance, and acceptance are important, and had already planned to cover the issues from several angles, we also know that we are more than what the media has portrayed, and we want to make sure all of our voices are heard.

“There can be moments where the school comes together and does positive and wonderful things, but there are also times when the negative thoughts are pervasive,” Spanish teacher Mrs. Joan Imms-Geiser said.

On November 2, Mrs. Siegfried addressed the student body in an assembly, where she described some of the inappropriate behavior and encouraged the student body to treat others in a respectful manner. The assembly was accompanied by a preview of the fall play, “The Crucible,” which tells a story of the Salem Witch Trials of 1692. The play showcases what can happen when a community turns on each other.

In the assembly and her email to parents, Mrs. Siegfried shared her concern that over the past two months, there have been isolated instances of students making derogatory comments, such as calling black students “cotton pickers” and lesbian students “dykes,” and some drawing swastikas and making the “Heil Hitler” salute. According to the administration, fewer than ten students were participating in and disciplined for these discriminatory behaviors.

“I think that for the most part this school is filled with students who are very well intended,” gifted coordinator and social studies teacher Mrs. Katie Quartuch said. “I just think they are a little [unaware of] how impactful their words and behaviors [can be].”

Many Southern Lehigh High School students feel that these actions are not representative of the student body as a whole, as less than 1 percent of the high school population of 1,073 has been disciplined for this behavior.

Students are still upset that these actions are taking place, regardless of the small number of offenders.

“It’s not everybody, but it is there and it should be addressed,” sophomore Mariama Sohna said. “It doesn’t matter how small the intolerance is.”

According to the Pennsylvania Department of Education, the population of Southern Lehigh is made up of 86.77 percent non-Hispanic whites. This demographic often earns the school the stereotype of being, a “rich, white school.”

“Whatever diversity we have is crushed by peer pressure. There really isn’t much cultural openness; everyone wants to be like the person next to them,”  junior Will Schaninger said. “A lot of students have never had a background in going to a lower income, more culturally diverse school; they have no point of reference to any of what they are saying and the true meanings behind [their words].”

“There’s no ‘black community’ here. There’s no ‘Latino community’ here,” senior Amir Gold said, “because there aren’t enough people for there to be one. In some cases like that, all the minorities ban together to form a community. I don’t think that’s happening here.”

Gold feels that most of the white majority of Southern Lehigh is accepting, although there are still cases of racism and classism.

“You hear about these cases all over the country where administration and teachers are actively discriminating against students of different racial and economic backgrounds, and that’s not happening here. It’s just a few students [making these comments],” Gold said. “We live up to it in our own way. I don’t necessarily think it’s a good thing, but it’s certainly better than what it could be.”

“I’m a minority [student] and you definitely see that there [is] an abundance of white people within our school,” senior Izzy Diaz said, “but I feel as though being branded as [a rich, white school] doesn’t speak to [who] we are as a student body and what we are able to do in our community.”

What is more apparent, however, is economic diversity within Southern Lehigh, as 11.18 percent of students are considered economically disadvantaged, and plenty of others fall into the middle class.

“Just like some minorities wouldn’t want to be stereotyped, I don’t think it’s fair to stereotype Southern Lehigh as being rich and white. That’s not the case,” sophomore Ryan Sheats said.

However, for many alumni, “rich and white” is exactly the stereotype that comes to mind when they refer to their alma mater.

“In fact, I honestly use that to describe my hometown when people ask me about it,” Class of 2015 alumnus Jimi Feldman said. “It’s hard to not think of the school in this way when you see lots of kids speeding through the parking lot in their Audis and BMWs.”

“I think in the past, that was a better representation of our  school,” sophomore Austin Collins said. “As of now, it’s less accurate, as our school is becoming more and more [diverse] all the time. I think that can play into the reason as to why [some] people are being more intolerant, because it’s new. They’re not used to that yet.”

Despite the lack of racial diversity, many feel that the student body is diverse in a different way, representing a variety of interests and opinions, as well as students dedicated to acceptance and helping others.

“Honestly we do lack diversity, but there’s so many different things that people bring to the table,” junior Anna Donato said. “People come from so many different cultures and backgrounds, that I think it really adds to Southern Lehigh as a whole, and we’re more than just ‘rich, white kids.’”

In order to combat these issues and brainstorm ideas for promoting acceptance, Southern Lehigh High School has implemented a tolerance committee comprised of administrators, faculty members, and students involved in Varsity Club, the theater department, Gay-Straight-Alliance (GSA), and other student organizations.

“They are trying to brainstorm various programs and activities that could work to put Southern Lehigh in a position where people feel more welcome,” assistant principal Mr. Thomas Ruhf said, “and people start to gain understanding of divergent cultures and ethnicities and different people inside the school and outside the school.”

Superintendent Mrs. Kathleen Evison plans to expand these efforts to include K-12 students throughout the district.

Several students and faculty believe in the importance of multicultural education to increase awareness. That is, putting students in situations where they confront cultures, ideas, and ways of life that they have never been exposed to before in order to broaden their perspective.

“I’m fortunate to grow up in a family where there’s people from Sudan, Korea, Ukraine, [there are] Muslims, Jews, atheists, Catholics, agnostics,” Gold said. “I’ve got a lesbian mother and a straight father. I’ve been to 17 countries. From a young age I’ve been raised with exposure to all these different religions and cultures, and that gives me a different and more tolerant way to look at the world.”

He believes that when people see things as unfamiliar, they fear stepping out of their comfort zones and meeting new people.

“That’s how we can combat this. Exposure to everything,” Gold said. “Just little sessions where you can feel free to speak your opinion in circles with people with vastly different opinions [from] you allows you to open your mind.”

Students are also being urged to take a stand when they see intolerant behavior and to treat others with respect. Assistant principal Mrs. Beth Guarriello encourages students to talk to an adult, such as herself, Mr. Ruhf, or a guidance counselor, immediately if they witness or are the victim of harassment.

Many students are discussing ways to improve tolerance throughout Southern Lehigh High School.

“I think we all individually need to change our actions and be more accepting of our differences,” senior Jenna Cyr said.

Likewise, teachers are taking similar actions to prevent intolerant speech and behavior in their classrooms.

Teacher responses can range from addressing the intolerant speech directly to contacting a building administrator to assist in dealing with a more serious issue.

School psychologist Mr. Cotie Strong urges teachers that if they do not address intolerance as it occurs, other students may think these comments and behavior are acceptable or ignored.

“[Intolerant behavior] can’t be tolerated. It can’t be ignored. It has to be made understood that it’s not acceptable in any circumstance,” social studies teacher Mr. Troy Ruch said. “Every person has the same right to be here, to have a learning environment that is conducive for them. And you don’t have a right to take that away from someone else.”

Tolerance and respect are important issues in society that demand to be addressed. Through hard work and dedication, Southern Lehigh’s students, teachers, and administration are confident that they can continue to work together to bring about a positive change, not only in their school, but in their community and beyond.

“A lot of the things I see here happen everywhere, happen at a lot of different schools, happen in society in general. Some people joke about things and we’re comfortable with it. I think if we talk about it, let people know truly how you feel, you can start changing people’s perspectives, actions, [and] their levels of respect,” Student Resource Officer Brian McLaughlin said. “Give them the opportunity to change, the opportunity to learn. Have that discussion with them. Help them reach that point; don’t demand that they reach that point. That’s true understanding.”