Islamophobia in the Western World 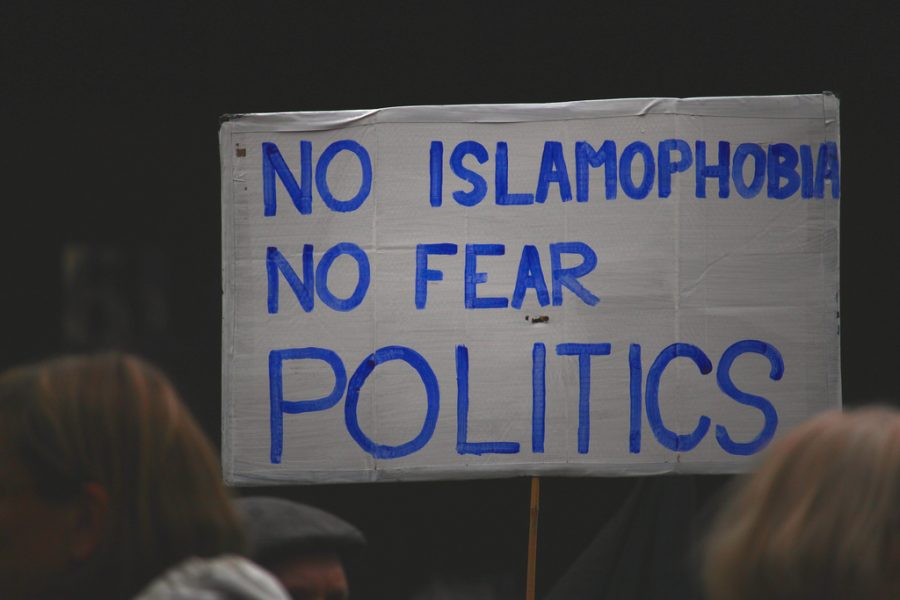 While the First Amendment of the United States Constitution, which promises free exercise of religion, is meant to apply to all residents of the United States regardless of their religious beliefs, many outspoken bigots seem to believe that this freedom applies only to non-Muslims. About 1.6 billion people, or 23 percent of the world’s population, practice Islam, yet Muslims are too often subjected to discrimination, hate crimes, and ignorance simply for being incorrectly linked to radical terrorism. This harsh generalization is false and hypocritical, and it sprouts from a place of fear.

According to the New York Times, hate crimes against American Muslims have skyrocketed to their highest levels since the September 11, 2001, terror attacks, and they have increased by 67 percent from 2014 to 2015. More than 480 anti-Muslim crimes occurred following 9/11; in 2015, the FBI recorded a total of 257 assaults, attacks on mosques, and other hate crimes against Muslims. Additionally, 91 anti-Muslim assaults were reported in 2015; 93 were reported in 2001.

“I am saddened by attacks perpetuated by fear and ignorance on the religion of Islam, and on anyone who is Middle Eastern and assumed to be Muslim,” social studies teacher Mrs. Jennifer Wlodek said. “I say to my students, ‘Are all teenagers alike?’ and they say, ‘No,’ and I say, ‘Exactly.’ Not all people who come from a certain religion, culture, or country are exactly the same.”

A 2016 Pew Research survey found that 59 percent of U.S. adults believe there is “a lot” of discrimination against Muslims in the United States today, and about 75 percent believe discrimination against Muslims is increasing. The same survey found that 49 percent of American adults think at least “some Muslims” in the U.S. are anti-American, and 11 percent think “all Muslims” are anti-American. A different Pew Research survey from 2015 found that 46 percent of Americans thought Islam was more likely than other religion to encourage violence.

“I think it is a shame that people think [Islam is a violent religion], but from what people watch and read on the news, it’s often not hard to have that belief. Islam, like Judaism, Christianity, Hinduism, and Buddhism, is not a violent religion,” world history teacher Mr. Lee Zeisloft said. “There have been violent acts committed by people who practice all faiths, but they aren’t a true reflection of any of the core beliefs of those religions, or of a majority of the followers. It’s unfortunate that people who don’t practice or really understand the religion try to categorize all the people within a faith as something that they are not.”

Sharp increases in anti-Muslim prejudice could be the result of divisive language and xenophobic rhetoric expressed on the 2015 campaign trail in response to terrorism. Former Republican presidential candidate Ted Cruz floated around ideas calling for law enforcement to patrol Muslim neighborhoods, and President Donald Trump once even called for implementing a federal database to track all Muslims. Both these policies single out Muslim Americans, thus conflicting with traditional American commitments to religious tolerance and freedom.

Even worse, President Trump recently signed an executive order closing American borders to refugees and immigrants from Iran, Iraq, Syria, Yemen, Sudan, Somalia, and Libya: all majority Muslim countries. However, this ban will prioritize Christian refugees, even though according to the Pew Research Center, less than one percent of Syrians granted refugee status last year are Christian. How can the U.S. promise freedom of religion and “liberty and justice for all” when the leader of the free world himself seems to value Christian lives more than Muslim lives? Why are Muslims labeled as terrorists, but Christians are not?

“Mass shootings in schools and even in Planned Parenthoods are usually committed by white men, yet people do not stereotype all white Christian men as mass shooters,” junior Emma Duane said. “I am much more likely to get trapped in one of these situations than I am to find myself in a terrorist attack with a Muslim individual.”

According to a 2016 study by Duke University sociologist Charles Kurzman, only 46 Muslim Americans were tied to domestic or foreign terrorism last year. Of those 46, 24 actually participated in a concrete terrorist plot. Those plots claimed a total of 54 lives, 49 of which were lost during the tragic Pulse nightclub shooting in Orlando. While these abominable acts are still inexcusable, it is important to note that they make up a microscopic minority of global terrorism; therefore, it is simply inaccurate to paint all Muslim Americans as a dangerous, menacing threat to the U.S. According to the Triangle Center on Terrorism and Homeland Security, attacks by Muslims accounted for only one third of one percent of all murders in America last year.  In fact, you’re more likely to be strangled by your own clothing or shot by a toddler with a gun than you are to die in a terrorist attack committed by a Muslim immigrant (a chance that measures up to roughly 1 in 3.6 million).

“If the media pushes the idea that ‘Islamic terrorists’ are not a reflection of an overwhelming majority of Muslims around the world, I think it’ll slowly improve how we as a society view the religion,” Mr. Zeisloft said. “And I’ll make sure, as a world history teacher, to do my part to continue to focus on the positive aspects of Islam and its importance in world history.”

We also cannot ignore the fact that extremism is not exclusive to Muslims. Between 2001 and 2015, more Americans were killed by white supremacists, anarchists, and other homegrown right-wing extremists than by radical Muslims. Furthermore, Muslims are victims of terrorism, too; according to the Global Terrorism Index, 82 percent of fatalities due to terrorist attacks occurred in majority Muslim countries such as Syria and Iraq. A 2016 survey by the Pew Research Center found that most people (94 percent in Jordan, for instance) in majority Muslim countries have an unfavorable view of ISIS, and believe that violence against civilians in the name of Islam is rarely or never justified.

The bottom line is that forming judgments and making decisions from a place of fear does nothing but amplify tensions and deepen divisions, and creating more enemies to fight a common enemy is not effective or beneficial. We as a country must remain united through compassion, and we must have the courage to stand up in the face of hatred. The U.S. has always been a melting pot of different cultures, ethnicities, and religions, a “golden door” for those seeking opportunity, and a safe haven for “huddled masses” escaping desperate and oppressive situations. It is arguably un-American to perpetuate hostility and intolerance against people who we may perceive as different or unfamiliar, and to build walls rather than bridges.

“[The best approach to minimize terrorism] is education,” Mrs. Wlodek said. “We need to provide people with correct information, not some random person’s thoughts on social media.”

“I hope that we as a country will be able to unite in order to truly and justly exterminate the issues in America regarding terrorism, foreign affairs, racism, and more,” Duane said. “Will we? Well, that’s up to us.”