It’s Time to Consider the Dark Side of Fast Fashion 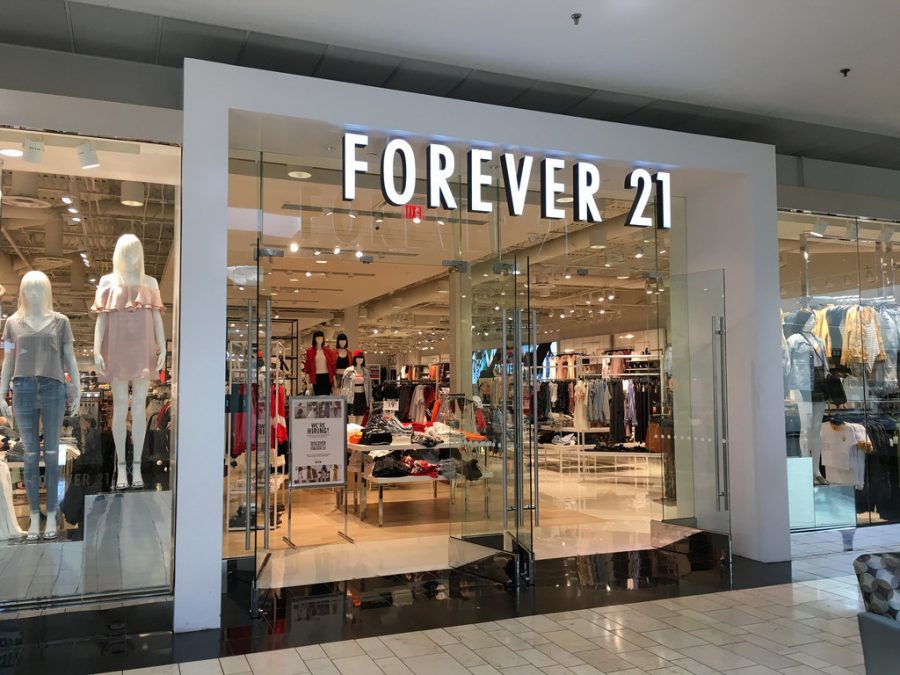 Forever 21 is one of the most popular fast fashion chains.

According to Merriam Webster, fast fashion is defined as fashion that works quickly to capture the latest trends as they happen, moving them quickly from catwalk trends to pieces that can be worn by the everyday citizen. However, the creation process behind these easily available clothing styles has been hidden from the public eyes in first world countries like the United States.
Unaware of the human exploitation that is used to create these readily available styles, many of people in the United States are buying these items every day, both from online retailers and in popular stores, like Forever 21, H&M, Zara, and Primark.
“I think that some are aware [of how their clothing is made] and some aren’t,” junior Alyssa Milan said. “Some people look at the tags on their clothing to see what types of products are in [the clothing] I also think…if they find something that they really like, they won’t care. That, or people just don’t care in general and will just buy what they want to buy.”
Companies are able to charge such low prices for their products by depending on extremely low production costs in lower income countries. According to the U.S. House Education and Workforce Committee, They will promise higher employment rates in such countries before moving to new locations. This leaves previously employed people jobless.
However, these jobs are exploitative. The Guardian found that workers are being paid around one Euro per day for long and tiring days of up to sixteen hours of labor. Often, these employees are not given lunch breaks, and are shamed for even taking short and necessary bathroom breaks. Workers have even been locked inside of the factory in order to finish producing orders.
“[Fast fashion] is definitely wrong,” senior Cassidy Garza said, “[Workers] should be paid a lot more than they are now because of the working conditions.”
These kinds of conditions aren’t just limited to sweatshops across the seas. According to the United States General Accounting Office, sweatshops are defined as any factory that breaks wage, health and labor laws on a regular basis.
A 2017 investigation of 77 Los Angeles clothing factories proved that exploitative conditions also exist in our own backyards. The Department of Labor discovered that labor laws were being violated in 85 percent of the factories that were visited, as reported by The Los Angeles Times.
The popular cheap clothing company Forever 21 was found to have lower than average prices, suggesting that the workers were being paid below the federal minimum wage of $7.25 per hour, and well below the Los Angeles minimum of $12 per hour.
“They should paid be the same minimum wage [as everyone else in the United States], because without them, we wouldn’t have the necessary items needed in everyday life,” senior Drew Sofranko said.
Pay that is less than what is necessary is not the only issue with the factories where fast fashion items are produced. Workers are faced with less than safe conditions on a daily basis, and sometimes these conditions can be deadly. In 2013, a 13-story building in Bangladesh that housed five clothing factories collapsed.
According to NPR, over a 1,000 people died and many more were injured, making it the most deadly garment disaster in history. Workers were reportedly forced to enter the factories day after day, even as a visible crack was forming in the building.
Unsafe conditions aren’t always so obvious, however. The Shanghai Academy of Social Sciences found that sweatshop employees in China were losing or breaking about forty thousand fingers per year due to the unsafe conditions.
“If you’re working, you should know that you are safe,” senior Emily Hartz said. “You shouldn’t have to worry about dying or being injured.”
The fast fashion industry is one that many consumers in the modern age are still in the dark about. The cheaper prices of the items make them more appealing to the average customer, but the low prices come at a cost to the people involved in the process of creating the garments.