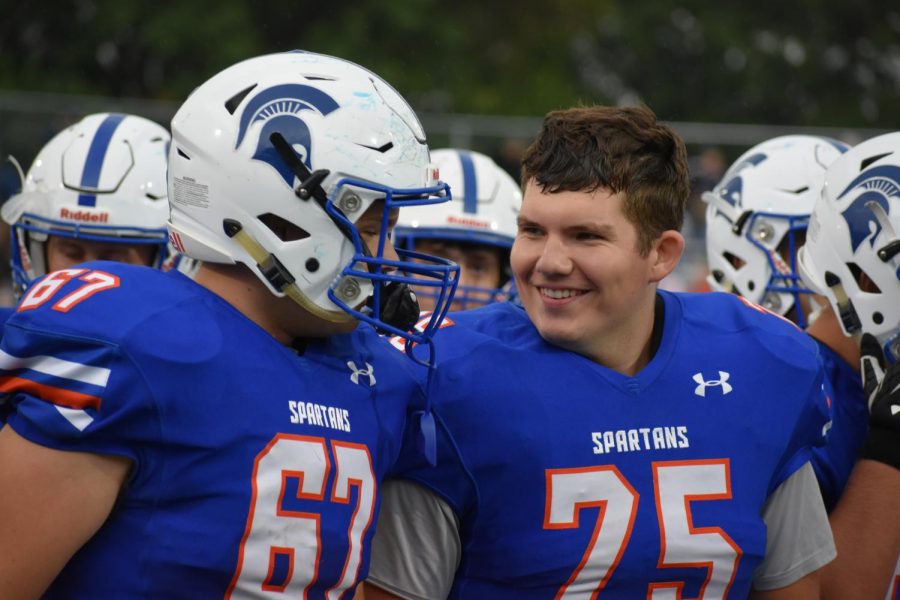 Senior Captain Eric Vingom encourages his teammate during a game.

Every Friday night, the stadium lights shine bright on the Southern Lehigh football field as the team comes barreling through the Spartan banner and roars of the crowd emanate from the stands.

Their 9-1 record officially qualifies the Spartans as the only team in the Lehigh Valley to sit first seed in the first round of District XI 5A playoffs. Tied for first in the Colonial League, Southern Lehigh is the team to beat.

“Our team’s biggest strength is the offensive and defensive lines. We have a very strong offensive line that has worked hard all year long and has gotten stronger each week.” defensive coach Derek Bleiler said.

“Rylee Craft and Eric Vignom are starters on both sides of the ball and have helped Southern Lehigh lead the league in rushing on offense, but also helped the defense in allowing the fewest points in the league. Noah Vogler has also become a passing threat which makes our offense even more dangerous.”

When Southern Lehigh battled the BangorSlaters, the Spartans claimed victory, winning 49-0. At Catasauqua, the Spartans crushed the Rough Riders 62-7. The offensive line dominated the field in the game against Notre Dame, helping the run game to win back control and take home the victory, 62-27.

“We all chose a goal and we all work together to achieve it,” junior Syncere Jackson said. “We all play each game for each other and for our goal.”

The Spartans only loss comes from the Homecoming game against Northwestern. According to senior Eric Vingom, the Northwestern defensive line and offensive live came out in a different formation than the Spartans had anticipated.

“We had prepared for everything needed, but we just didn’t know what to expect and we were not prepared for how Northwestern played,” Vingom said. “We did not think they were coming out like that.”

The loss against Northwestern was hard on many players. However, the setback drove the team to be more determined as they look toward the future. The Spartans hope to come together and rise to the top to accomplish greatness for the rest of the season.

“I think our biggest strength is the bond that a lot of our players have,” Coach Bleiler said. “Playing football is something that brings people together. A lot of these players have put in countless hours in the offseason and built a bond that carries out to the field. They trust each other and know that they can count on the person next to them when the game is on the line.”

The Spartans defeated Salisbury 58-22 on senior night becoming Co-Champions of the Colonial League.

Fans are ready and excited for the post-season as the team advances into PIAA District XI playoffs. They will play at home on Nov. 1.