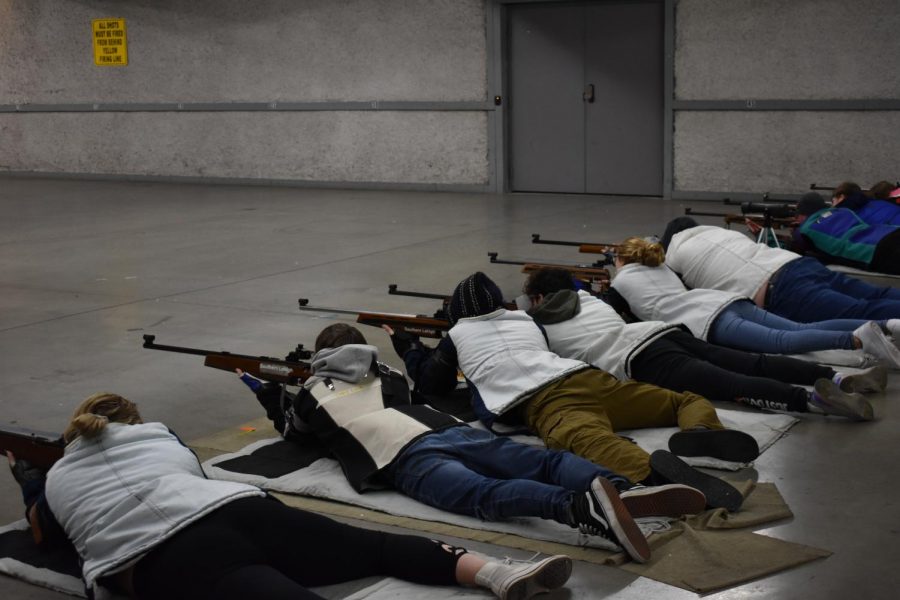 Spartans line up to practice their aim

In a room with fluorescent lights and no windows, a group of students lie on the ground, gazing intently towards the far wall. Holding completely still, the only sound in the room is the in and out of breath, and the occasional loud pop. Though it may be an unfamiliar scene to an outsider, this is just another practice for the Southern Lehigh rifle team.

“I guess you could say it’s one of the few sports that requires patience,” senior Richie Gilmore said. “In another sport, like lacrosse, for example, you have to make a move right then. In rifle you have time to prepare yourself and you can decide when and when not to shoot, which I guess adds to the mental piece as well.”

Rifle is a very unique sport; for one thing, the team practices in a shooting range, rather in a gym or outside. Instead of running around like traditional sports, athletes lie as still as possible on their stomachs.

The Southern Lehigh rifle team ended their regular season with a record of 8-1, and won the 2019-2020 NEPA Rifle League Championship.

“I am proud of my team. I love seeing students succeed and grow in the sport,” said Mr. Gaugler.

In rifle, there are a few requirements to join the team. First and most importantly, each student is required to undergo a psychological evaluation. In addition, they have to make sure they are eating right, so that their body is able to maintain steadiness while shooting.

“You have to change up your diet a bit,” Mr. Gaugler said. “Consistency is the main thing to watch there, make sure you’re not all over the place.”

Once a student is a part of the team, students are required to follow specific procedures. On Mondays, Wednesdays, and Fridays, the team holds practice where they do shooting and concentration drills. These are designed to improve an athlete’s accuracy.

“We can’t eat sugar before matches because it could cause our heart rates to go up,

” said sophomore Veronica Comfort. “You have to be perfectly calm and still so the shot isn’t shaky.”

It is also required that students take a small break before they shoot to come to a place where they are calm, cool, and collected, not only for the obvious safety reasons but also to help better their concentration and performance.

“Waiting time in between when we are shooting at practice is very relaxing,” said Gilmore, “Some people meditate. Mostly you just take some time and let yourself drift into the state you need to be in to shoot.”

Between practices and meets, the team spends time together to bond.

“The kids will go to the movies, or go ice skating or something, just to feel connected as a team,” said Mr. Gaugler.

Because the nature and structure of practice is different from most sports, the students also form bonds during that time.

“We kind of bond when we’re waiting to shoot; there’s a lot of down time in practice,” sophomore Veronica Comfort said. “We just sit around and talk.”

After all, the team that bonds together, wins together.