Mr. Cooper Steps Down as Head Coach for Girl’s Basketball 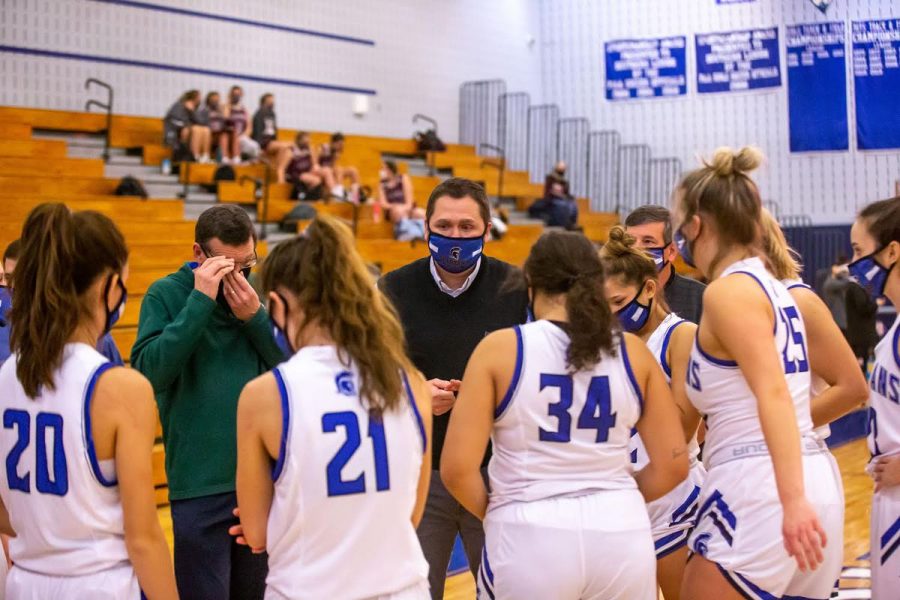 Mr. Matthew Cooper has stepped down from his position as head coach of the Girl's Basketball team after a seven year tenure defined by a plethora of triumphs and accomplishments.

“Lots of good things happened in life,” Mr. Cooper said. “I love coaching basketball, and it’s been a huge part of my life, but now I want to focus on some different things.”

Mr. Cooper’s decision to depart as head coach marks a fundamental change for the team. Having become the face of the program, his departure concludes a tenure defined by a string of triumphs and accomplishments. From earning the team their first PIAA District XI title, to a five-year winning streak in the Colonial League Championship, Cooper, alongside assistant coach Mr. Lou Skrapits led the program to a 145-33 record over the course of seven years.

“He has been a great coach for many years now and dedicated a lot of his life to making this program better,” senior Stephanie Schmitt said. “Coach Skrapits and [Coach Cooper] have made such a positive impact on so many players over the years including myself. I respect his decision to step down as it was for himself for once.”

Mr. Cooper’s legacy as head coach is defined not only by competitive success, however; he has also been credited by players as instrumental in helping to foster an enjoyable, tight-knit team culture.

“Coach Cooper had a big impact on the basketball program, and he will be missed by many players,” senior Caroline Bennett said. “He always said we were his basketball family, and that meant a lot to us. He created a close environment for us that really helped us grow as people and as players.”

The familial culture of the team has been accredited as a fundamental facet of Mr. Cooper’s coaching style, and heavily defines his legacy.

“He was always emphasizing the family aspect of the team,” junior Ashley Meinhold said. “Everyone on the team was super important to him, and were such a close knit group, and he always said that we were part of his family, which was special.”

For Mr. Cooper, the decision to step down is one fraught with mixed emotions.

“The people, the girls, being able to coach the athletes, and working with coaches and people, I’m gonna miss that,” Mr. Cooper said. ““I’m gonna miss it next season, but I’m also excited about some other things.”

For members of the team, meanwhile, Mr. Cooper’s decision is perhaps unforeseen but ultimately understood.

“At first I was surprised because I didn’t expect him to retire from being a coach. Because I’ve known him for so long, and I wanted to have him as my coach for senior year,” Meinhold said. “But I understand that basketball is a huge time commitment, and he’s put so many years into the program, and now he can have more time for him and his family.”

Mr. Cooper’s impact on the program cannot be understated, and his departure as of now leaves the team with an uncertain future. However, the legacy which Mr. Cooper has left behind is likely to last long after his departure and lay the foundations for a bright future for the program.